I heard about your split from Melinda. It’ll sting for a while, but take it from one tech exec to another: Your first divorce is actually the start of your new marriage to life.

When my first wife left me, I was devastated. I was running a cutting-edge tech company called the Burlington Northern Railroad, leading a revolution in how useless items were transported around the country. But my wife didn’t care about that. All she could fixate on was the fact that I “wasn’t an engaged father or husband”, whatever the hell that means.

Just like when you sell your company or achieve some other milestone, you should let the world know. Personally, I think adding your new status to your social media profiles is the best way to do. See the suggestion below for your Twitter account. 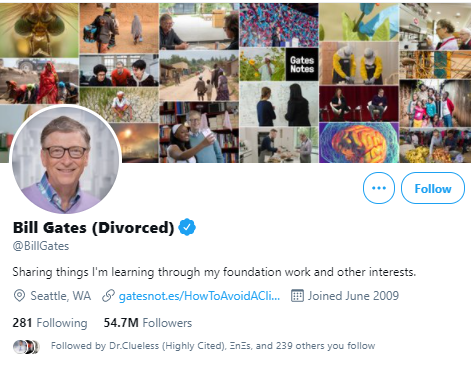 2. Limit yourself to just 5 beers at Hooter’s

A big mistake I made after my divorce was heading down to Hooter’s and pounding eight or nine beers at the bar. I’d end the night sobbing about how I missed my wife and wanted her back. These episodes are inevitable but can just as easily be done at home away from the public. Have just four or five beers at Hooter’s and then head back to your rented one-bedroom apartment (it’s just temporary until you find a better place) for a nightcap and cry.

After my fourth divorce, I went on an irrational shopping spree of useless tech companies trading at insane valuations. I became a majority shareholder in Pets.com, WebVan, Yahoo! and a bunch of other companies that barely exist today, if at all.

While this might sound like reactionary behavior, it was actually the best decision of my life. I was able to pay myself massive fees for managing the investments with my investors’ funds. And when I say manage, I mean laying out by the pool at the Fontainebleau in Miami Beach pathetically hitting on 27-year old models who only give me the time of day after I tell them my net worth.