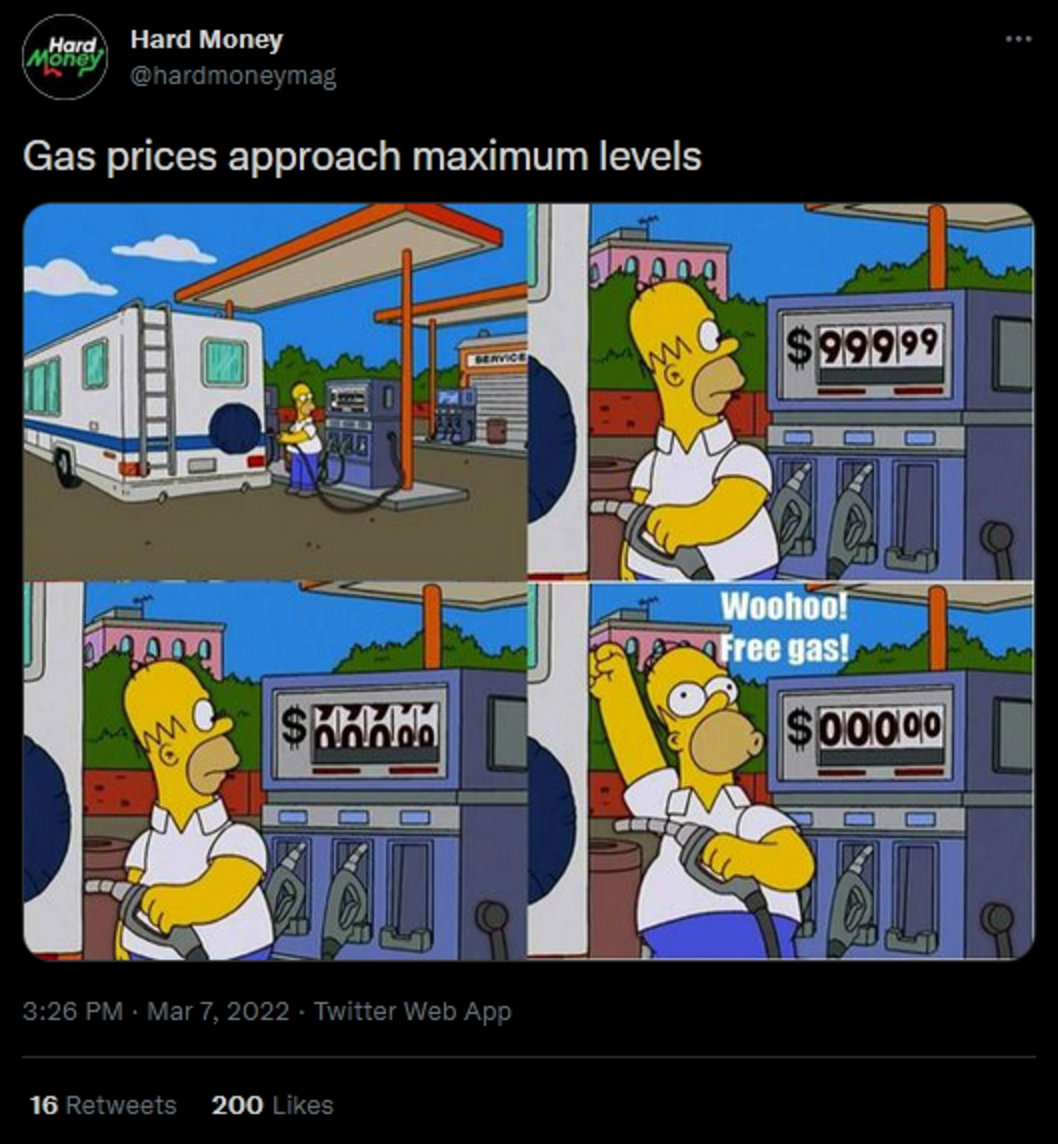 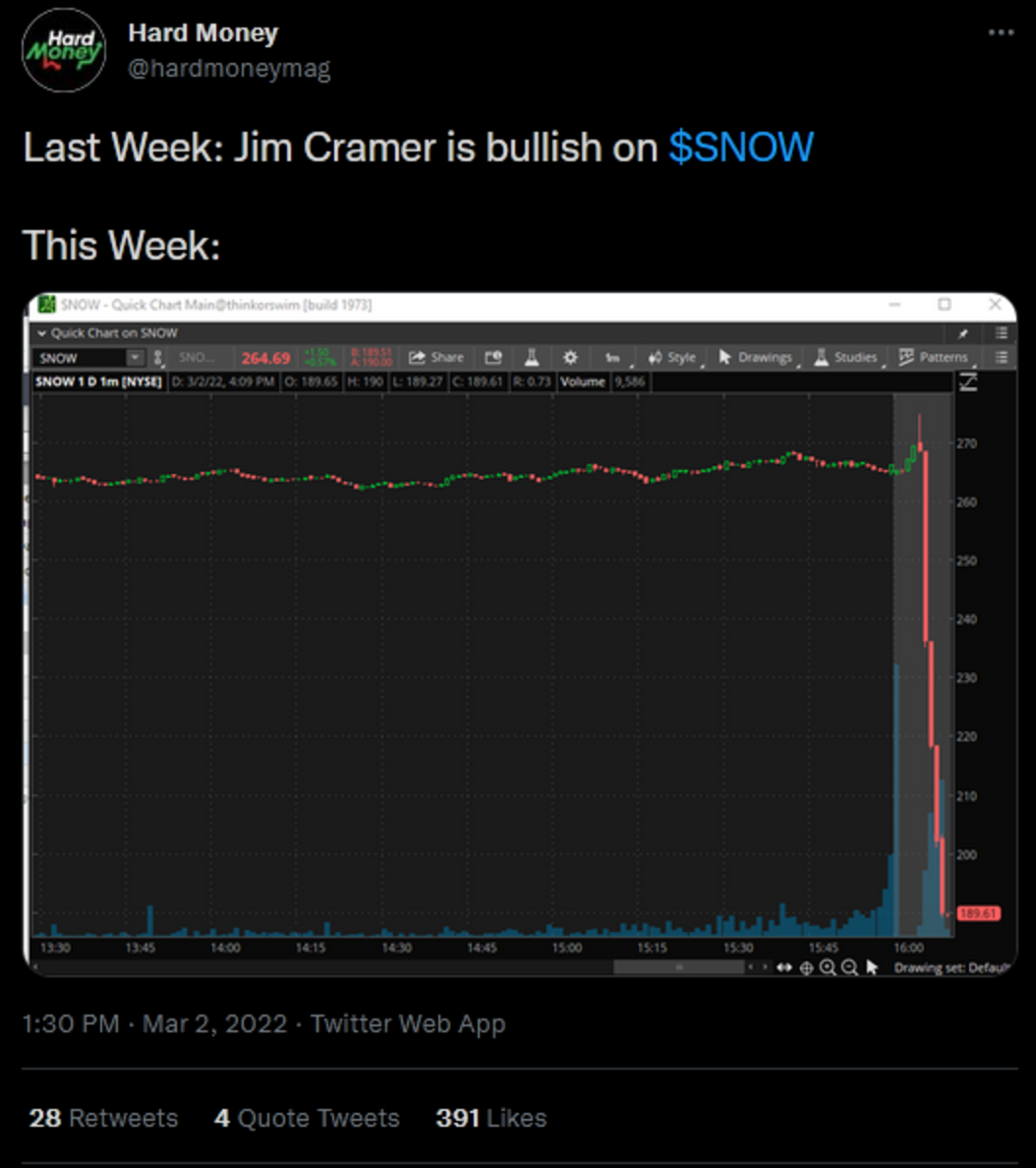 There’s an old expression that “generals always fight the last war.” It applies to stock markets too. Everyone takes the lessons of the recent past and assumes that they will continue forever…when in fact the actual design of the market is to price in what everyone knows and then do something completely different.

So when Cramer is chasing SNOW… it’s energy stocks that are ripping. And if you have been reading our newsletter instead of listening to Bald Jim, you were already looking at the space.  Instead of watching the tape, you were thinking about the potential impact of Russian production being removed from global commodity markets. And maybe you caught some of this move. But by the time Cramer wraps his head around energy, that game will be up.

Things are moving super fast right now – so do NOT get caught staring at what happened, because you’ll get run the fuck over. Look forward and think about what things could mean.  What’s next? If you read last week’s special edition on sectors, you know that consumer staples are starting to make a move. Why? Look for beneficiaries of downstream inflation, like supermarkets. There’s always a bull market somewhere. Get you some.

Just wait till they cut off OnlyFans. 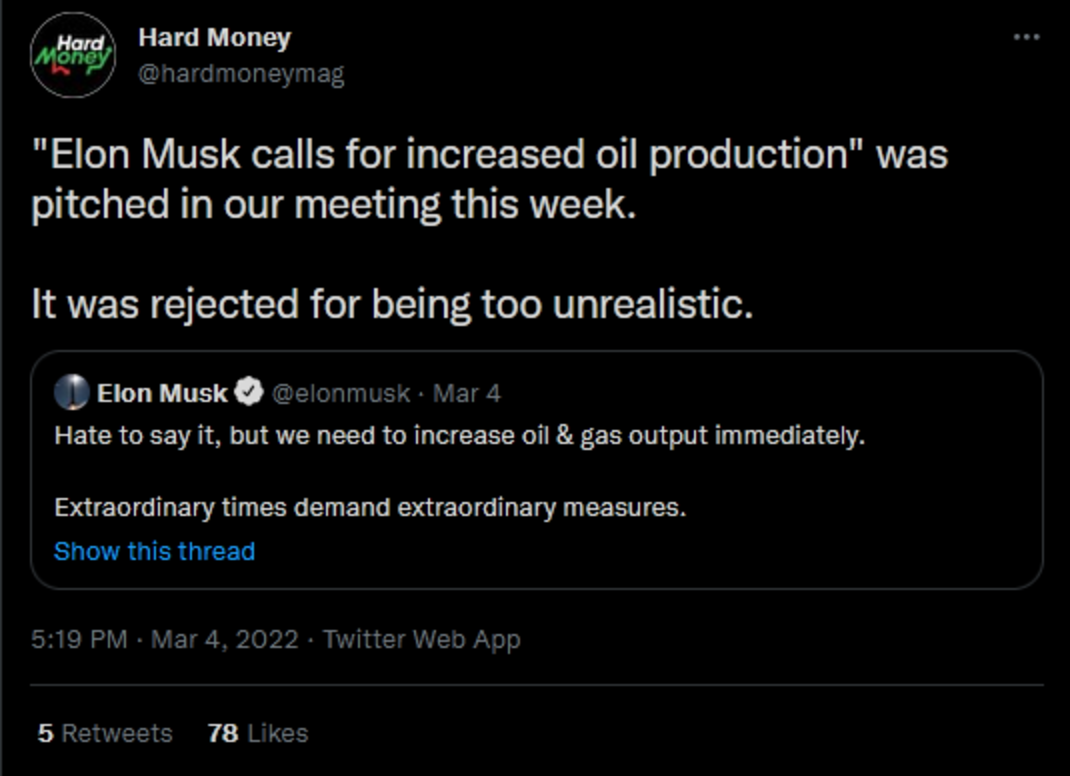 GUYS WE ARE A SATIRE SITE DO NOT FOLLOW OUR ADVICE THIS MEANS YOU ELON.

Get The Newsletter If you’re reading but haven’t subscribed, join below!- 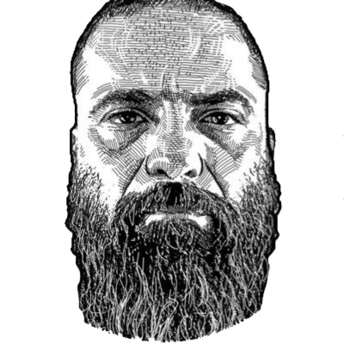 What the hell is SWIFT and should I care?

In the midst of the whole Russia vs. Ukraine shit show, you may have seen headlines saying “the West will be cutting off Russian financial institutions from the SWIFT financial transactions systems” and how this is both a threat against Russia and could also be an issue for the global economy.

SWIFT stands for “Society for Worldbank…” – you know what – who cares what it officially stands for?  It is basically a way for international banks to “talk” with each other and allow them to do transactions.

By cutting off Russian banks and other financial institutions from talking to other global financial institutions it means they are stuck on an island. This will choke the money into the Russian economy and prevent them from buying the stuff they need (like food, electronics, cars, whatever) and also prevent them from selling stuff (potentially oil).

No money, no goods = shitty economy, and unhappy citizens. The calculation here is unhappy citizens will boot Putin out. This is not getting a lot of play in the media but we think is a MUCH bigger likelihood than people think at this point.

Should you care? A little. This could be a good bludgeon to get Putin to chill (and or get booted) and doesn’t cost the rest of the world very much.

The only risk is that it could lead to unintended consequences in the global financial system. Possible but highly improbable in our view given the size of the Russian economy and the focus of global financial regulators. We shall see…

The HMMDP portfolio marked $54,396 as of Monday’s close, up 444% since inception. It has been a choppy week with all sorts of crazy news and world events. The portfolio saw a drop but Matt is still confident behind the wheel. 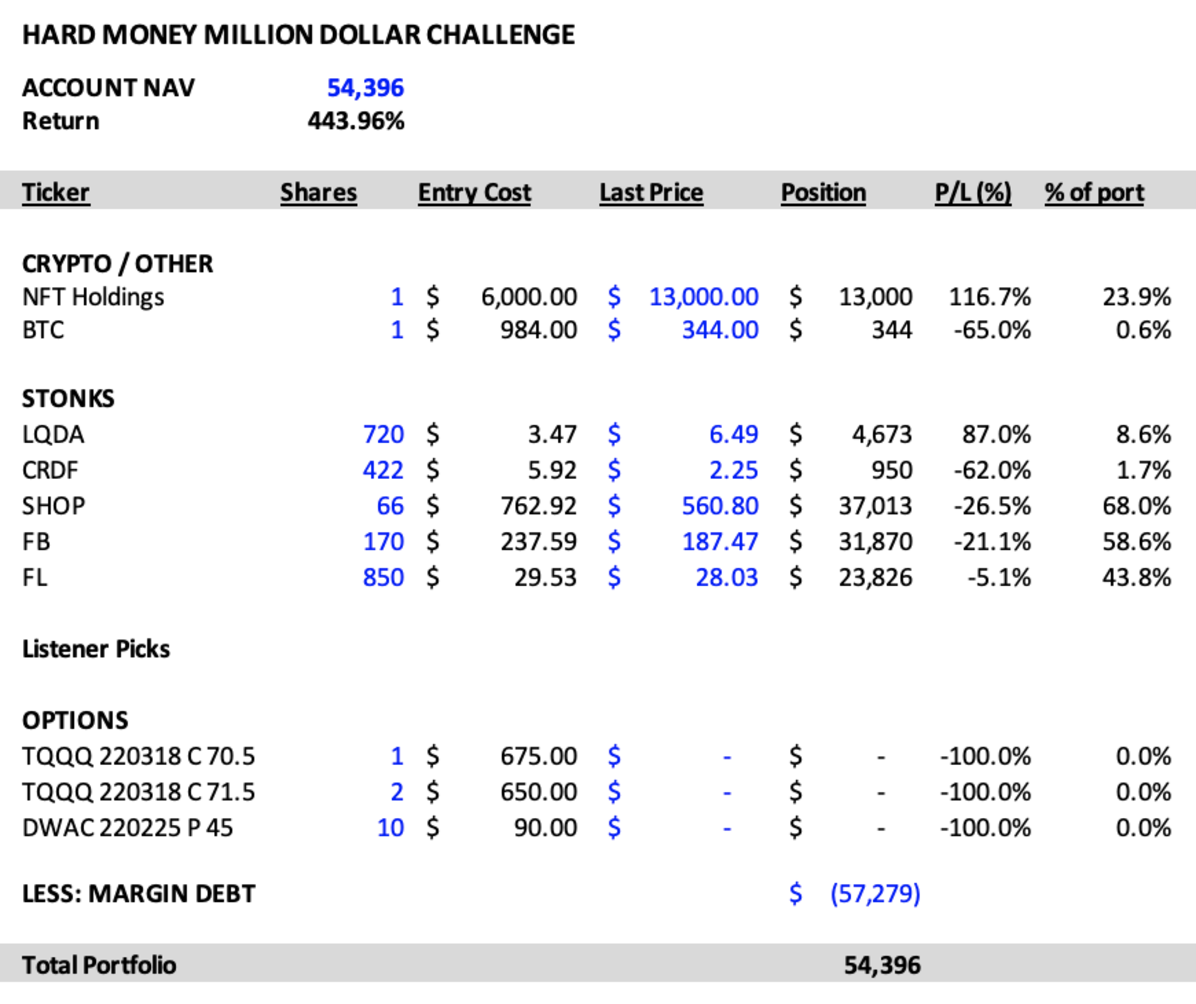 It was actually a quiet week with Matt traveling to England on business. The only major move was to flip 4100 $EGY shares for an 8% profit. Footlocker has been up and down but Matt is still bullish on his thesis. To help bolster his trade we have Andrew Walker on tomorrow’s podcast. Andrew is the Head of Research and Portfolio Manager at Rangeley Capital and joins the guys to talk more about retail stocks and stock buybacks.

Tune in below or watch on Youtube once uploaded

Trading questions you’d like answered in future episodes of Hard Money’s Million Dollar Podcast? Send them to [email protected] – be sure to add “Question” in the subject line.